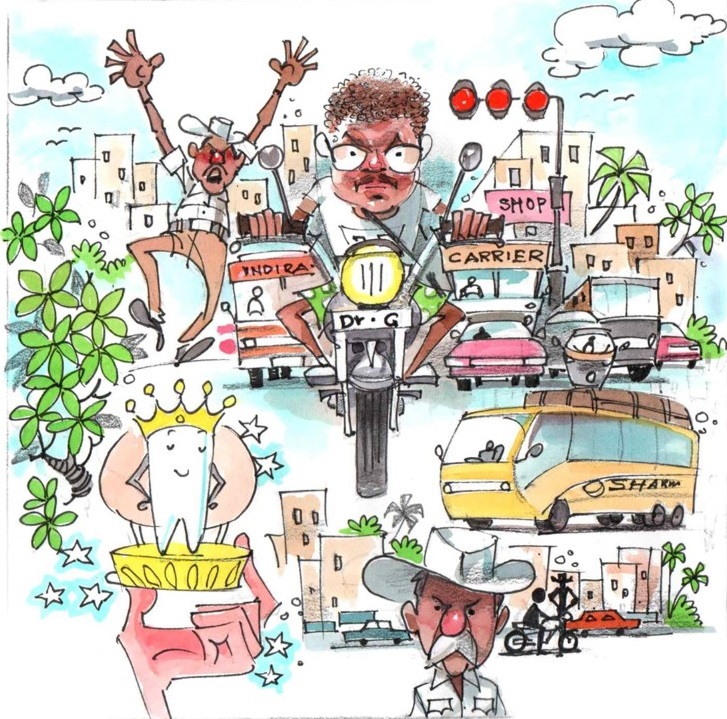 In a sleight of hand manner he invented a tool that created a “peep hole” and easily reached the abutment screw without a challenge. Very inventive, very impressive! I was introduced to the Hindi term “Jugaad”! They have coined an own expression for the tricks that are used to get the job done in an unexpected situation! It reminded me to an equivalent Brazilian expression: “jeitinho da cintura” (flick/kick out of the hip); their source of magic, their source of all phenomenal moves during a soccer match!
The dental lab gave the green light to my preferred Zirconia crown. It had to arrive on Tuesday the 17th November, well four days before my departure and I was happy! HOWEVER —– it never happened! The smooth sailing to that point ended abruptly!

Warming of the roller coaster:

It was late on Saturday night, November 14th, after office hours, when Dr. Gurudev received a call from the lab located in Kerala, about 300 km away, to tell him 2 things:
1. The Zirconia crown is not possible – only a metal-ceramic crown
2. In the process of fabrication of the Zirconia crown they had messed up;
A certain part failed and they needed a new part to manufacture the new metal-ceramic alloy crown.
Dr. Gurudev “fell off his nightwear” – who was already in his night shorts and t-shirt by then! How to get a new piece now? This was impossible within an hour, until the bus to Kerala left Bangalore. Postponing the whole project was not possible either, the main character had her departure scheduled.
An incredible frenzy started!

Dr. Gurudev called his assistant to rush to the office, taking him off his evening drink. Together, they turned the office upside down to find what was necessary and still didn’t find it. Suddenly, he remembered the ‘test model’ that had been created in the planning stage. They opened it up and got what they wanted.

Now, how to get it to the bus?

The bus that had arrangements with the laboratory was on its way out in 15 minutes! Still in his shorts and t-shirt, jumped on his bike, wildly making way through the already wild traffic, violating the last traffic rules applied in Bangalore and then… he got stopped by the police!! No matter how much he declared his innocence and emergency they made him breathe through the ‘breathalyzer’. He called the bus driver and urged him to delay the departure. After another 30-minute frenzy, he reached the bus station and gave the package to the driver, having to endure the remarks and furious screams of impatient passengers.
The lab received the part on Sunday morning and in a priority setting worked day and night to manufacture the crown. The following Monday night the finished work was flown to Bangalore. I received a message from Dr. Gurudev: “Your crown has just arrived and we will meet tomorrow!” UFFF! After the epic James Bond scene, the planned date for crown fixing was still met!
Next day, Tuesday, Nov. 17th, Dr. Gurudev put the crown onto the abutment and I was in disdain!
The roller coaster was still running.